The Band Council of the Adams Lake Indian Band are the elected officials of the Band as per our custom Adams Lake Secwepemc Election Rules. 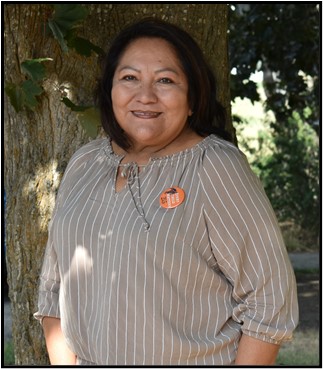 Joyce, Xwe’xwna, Secwepemc re skwest was recently elected to Tkwemiple7.  Council June 2021, holds the Admin/Finance pillar with secondary Community Services pillar. Joyce is currently chair of the Finance & Audit committee.  As per ALIB election regulations, a councilor from Sxwetsméllp community is to be represented, Joyce holds this title.

Joyce has previously been on council from 1997-2005 and held Natural Resource and Economic development portfolios.  Having graduated from business at TRU, Banff school for negotiations, RespectED training, and various others.  Joyce brings a wealth of life skills, knowledge to her role as Tkwemiple7.

Joyce has three children, Jayna, Jennifer and the late Hat Pooley who were born in Arizona and New Mexico and of Secwépemc, Syilx, Navajo and Hopi descent.  Joyce proudly declares she has five grandchildren Kash, Kohl, Kade, Kayla and Emily Pooley, daughter of Hat.

Joyce has a diverse career of Native Art and Pooley Funeral home businesses in Arizona, she has worked for Alberta Indian Investment Corp, Canadian Red Cross, Westbank First Nation, MOFR and recently First Nation Health Authority; a role engaging with First Nation communities across the Interior region.   Joyce has served on many boards namely All Nations Trust Company for 17 years, College of Optometrist of British Columbia for 6 years and Salmon Arm Folk Music Society (Salmon Arm Roots & Blues).  “We are a music loving family for generations” and she enjoys this participation.

Having served as a leader before, she had the opportunity to work with some of our most notable members which she describes was “pure fortune and most honorable, learning from some of our notable elders” such as the late leaders  Mary Thomas, Wolverine, Ken Dennis, Sarah Deneault as well as being mentored by her late mother and now holds the role as matriarch of her family.

As a proud leader, she wants to focus on Secwépemc language, community safety and youth; she notes how proud she is of her grandchildren and all of our youth – they are our future!